Gaia greetings everyone
As we enter into the latter part of 2016 and here in SA the beginning of our Summer season, today we’d like to discuss the harmful effects of chemically based insect repellent.

Much has been written, studied and researched by many in an effort to formulate a lotion or application that can act as an effective deterrant in combating the irrritations and often harmful, and in some cases deadly consequences from been bitten by a mosquito.

We will in this condensed, yet informative newsletter, highlight some of the challenges facing those at risk as well as the risks of the chemicals used in many off -the- shelf products that are at our disposal today.

What chemicals are presently being used?

Most insect repellents are loaded with what many describe as “toxic chemicals”, including the pesticide DEET.

Diethyltoluamide (DEET) was first used by US troops in 1944 to combat mosquito’s in the mosquito infested jungles of Vietnam, but was previously tested and used by the US Dept. of Agriculture as a pesticide, to combat pests affecting crops in farmlands and was then later adopted by the military as a mosquito repellent. There is no question that DEET is an effective and deadly mosquito repellent but the harm it may cause to those using it as well as the ecosystem is obviously of much more consequence.

The biggest challenge when using chemicals to combat mosquito’s is that they often adapt to the chemicals and are thereby capable of building up a resistance to the chemical used. The other being the use of these powerful chemicals, and the harm that we could cause ourselves.

A chemical that is designed to kill mosquitoes can likely do harm to other life forms when entering the eco-system or applied to our skins and for this reason many have found alternatives to using these toxic and harmful substances. 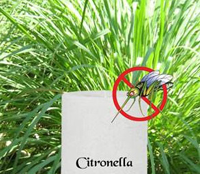 The most commonly used ingredient in most natural / organic mosquito repellents is of course Citronella Grass ( genus Cymbopogon) oil however this is not natures only mosquito deterrant and there are others that when used in a formulation together can be of extra assistance to those at risk of being bitten.

A study at Iowa State University concluded that even catmint (catnip) was found to be at least ten times more effective than DEET without harming the user or the environment. There are also many other essential oils that have a decided effect in reducing the chances of being bitten and these natural oils are included in our Mosquito Repellent that we currently manufacture.

Formulated almost 20 years ago and achieving results for the same period of time this is possibly one of Gaia Organics’ best known and most widely used products in our range.

The formulation consists of a wide range of essential oils which almalgamate to form a comprehensive, non-toxic application which has achieved excellent results as an effective mosquito repellent in areas as far as Mozambique, Malawi, Zimbabwe and is game park friendly!

Applied lightly to the skin prior to being exposed to mosquito’s as a natural preventative is key to keeping them at bay and especially safe for babies as one would rather avoid commercial insect sprays and lotions.

Entering the summer months with the risks of mosquito’s increasing dramatically we would like to offer one free Mosquito Repellent with all orders over R500.

The house of Gaia … coming soon

We’re on the move … Gaia Organics now have their very own property in the beautiful seaside town of Plettenberg Bay in the Western Cape. Details to follow …

Many blessing from the team Alan, Cindy, Allie & Claudia