Sodium Ascorbate is a pure buffered, soluble Vitamin C powder. Vitamin C is an essential nutrient that cannot be produced by the body therefore must be replenished daily to prevent oxidative cellular stress. Sodium helps to regulate the amount of water in the body and aids the movement of sodium in and out of the cells critical to many bodily functions.  The sodium in this product differs from common table salt as it is not combined with chloride, the “salt” most often associated with hypertension.

Suggested dosage: As a dietary supplement, mix ¼ teaspoon into a glass of apple or vegetable juice or water. Take with or without meals. Not to be used as a medicine but for health optimizing purpose only.

Therefore, while ascorbic acid is the pure form of Vitamin C, sodium ascorbate is the sodium salt of ascorbic acid.

NOTE : THIS IS NOT A MEDICINE AND IS USED AS A NUTRITIONAL SUPPLEMENT

What is Sodium Ascorbate?

Sodium ascorbate is the sodium salt of ascorbic acid and is a common mineral salt used as an antioxidant food additive.

Being a mineral ascorbate, it is buffered and, therefore, less acidic than ascorbic acid.

However, when including sodium ascorbate in diet, it is important to keep in mind that the sodium is also being very well absorbed by the body along with the ascorbic acid.

Therefore, the dosage of intake should be carefully monitored. Sodium ascorbate is water soluble and hence can only protect water soluble forms from oxidation.  ¼ teaspoon is the equivalent of 500mg’s vitamin C. 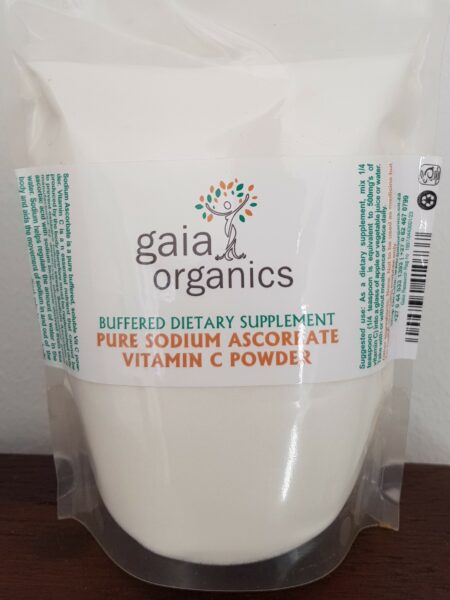